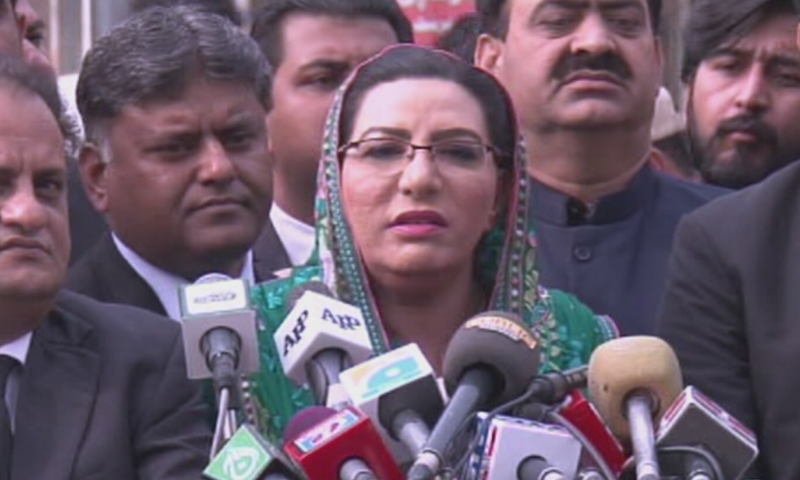 Special Assistant to the Prime Minister on Information Dr Firdous Ashiq Awan on Thursday said that the government had thrown the ball in the PML-N’s court on the subject of Nawaz Sharif going abroad for his medical treatment.

On Wednesday, Federal Minister for Law and Justice Farogh Naseem announced that the former prime minister will be given “one-time” permission to travel abroad for his medical treatment for a period of four weeks.
He had said this permission would be subject to the Sharif family submitting an indemnity bond “to the tune of Rs7-7.5 billion”.

“At this stage, Nawaz Sharif has been allowed to leave the country for four weeks, but in case his doctors recommend further treatment he can prolong his stay abroad,” the law minister had said, without mentioning for how long the PML-N supremo could stay abroad.

Shortly after the news conference, the PML-N had turned down the government’s “conditional offer” and refused to furnish a surety bond, saying after submission of bail bonds in the Islamabad High Court (IHC) on Oct 29 when Nawaz was granted bail for eight weeks, there “is no need” to give another indemnity bond to the government.

Awan, talking to reporters today following an appearance at the IHC, said that the government had asked for the guarantee in order to complete legal formalities.

“Now the country will decide […] who has a role in turning a humanitarian issue into a political one.

“The government is repeatedly telling them [PML-N] to move forward. The condition of Nawaz Sharif’s health does not allow for it to be politicised,” Awan said, adding: “Complete the legal formalities, submit the indemnity and immediately take him wherever you want for treatment.”

“On the basis of human compassion, Prime Minister Imran Khan gave [Nawaz] the waiver and permitted him to go [abroad] for treatment one time,” she said, adding that this was “out of the box” as the laws and sections of the Exit Control List don’t permit it.

The premier’s special assistant said that the spokespersons for PML-N were politicising the matter, calling it an “unfortunate approach”.

“From this forum, I appeal to them again: Our political match is not a T20 match, nor a One-Day, this is a long series.

“The long series has to continue in the field of politics, you will get opportunities, so will we,” she said, urging them not to “hit sixes and fours” regarding Nawaz’s health.

She said that the government’s leadership had told them not to make any statements regarding Nawaz’s health but the PML-N’s “army of spokespersons” was busy trying to mislead people.

Awan urged PML-N president Shehbaz Sharif to play the role of a responsible leader and make a decision.

“This political fighting […] and throwing bouncers on one another will continue, Nawaz’s health shouldn’t be
compromised in this.

“Once again, the government has thrown the ball in PML-N’s court.”

She noted that the PML-N was scheduled to meet today and hoped that they would prioritise the former prime minister’s health.

A day earlier, the Interior Ministry issued a memorandum regarding one-time permission for Nawaz to travel abroad. In case Nawaz avails of this offer, he or his younger brother Shehbaz Sharif has to furnish “indemnity bond of over Rs7 billion (08 million UK pounds, $25 million and Rs1.5 billion) in favour and to the satisfaction of an additional secretary ministry of interior”.

PML-N in a fix over going to court

The PML-N, meanwhile, seems to be in a fix as it is yet to decide whether to approach the court for removal of its supreme leader’s name from the no-fly list. The main opposition party has called an emergency meeting of its leaders in Jati Umra, Lahore, today)to discuss the matter in presence of its legal brains, Nawaz Sharif and his daughter Maryam.

According to PML-N spokesperson Marriyum Aurangzeb, Shehbaz Sharif will also hold a press conference on the matter today.

A senior leader of the PML-N said: “The option of moving the court to seek directives for the government to remove the PML-N supreme leader’s name from the ECL is under serious consideration. It is highly expected that opposition leader in the National Assembly Shahbaz Sharif files a petition in a day or two.”