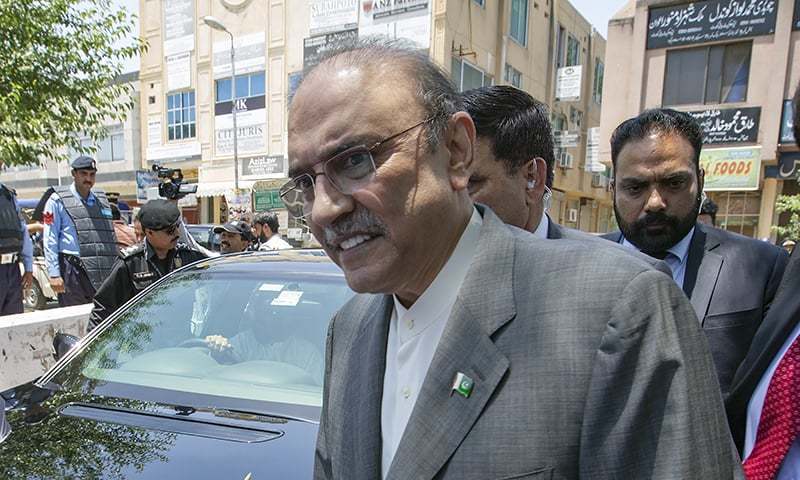 PPP co-chairperson Asif Ali Zardari was on Wednesday granted bail on medical grounds by the Islamabad High Court (IHC) in two cases filed against him by the National Accountability Bureau (NAB).

Zardari, who is being probed by NAB over allegations of money laundering and corruption, had filed an application in the high court earlier this month to seek bail in two cases. A two-member bench comprising IHC Chief Justice Athar Minallah and Justice Aamir Farooq heard the application today.

NAB’s prosecutor general Jahanzaib Bharwana and deputy prosecutor general Sardar Muzafar Abbasi represented the anti-corruption watchdog, while Farooq H. Naek argued on behalf of the former president. During the hearing, NAB submitted Zardari’s medical report prepared by a five-member medical board, which was constituted on IHC’s orders to examine the former president.

The bench told NAB’s prosecutor to read the report aloud. According to the medical board, Zardari is suffering from type-2 diabetes and also faces heart ailments. It further revealed that the former president had three stents placed in him and needs an angiography.

The report said that it was not possible for the former president to receive proper treatment while in jail.

NAB’s legal team told the court that the bureau had completed its interrogation and filed a reference.

“Does NAB want Zardari to remain under detention and receive treatment on state’s expenditure?” asked Justice Minallah. The anti-corruption watchdog did not answer. Subsequently, the high court granted bail to Zardari in both cases.

The bench also heard a bail application filed by Zardari’s sister Faryal Talpur but adjourned it until December 17 as NAB had not submitted a response. In an application filed earlier this month, Talpur maintained that she is the mother of a differently-abled child. In order to care for her child, she asked the court to grant bail until the completion of the trail.

Zardari, Talpur and other accused face charges of corruption through fake bank accounts and embezzlement in the financial facility for Park Lane Private Limited and Parthenon (Pvt) Limited. NAB alleged that the national exchequer suffered a loss of Rs3.77 billion because of the irregularities.

Zardari was under detention on charges of money laundering and has been undergoing treatment at the Pakistan Institute of Medical Sciences (Pims) in Islamabad. He was arrested by NAB after the cancellation of his pre-arrest bail by the IHC in the fake bank accounts case on June 10.

He was shifted to Pims in October after the medical board stated that he was suffering from cardiac problems, diabetes and other ailments, and needed medical care.

In his petition, Zardari had maintained that he is suffering from a heart condition and diabetes, which means that he has to constantly monitor his blood sugar levels.

Bilawal thanks public for prayers

After the hearing, PPP chief Bilawal Bhutto-Zardari thanked the judges for “doing justice”. He claimed that the “NAB-government nexus wanted to stop, pressurise and threaten” the party.

“If the government thinks that they can pressurise us with these tactics then it is mistaken. I want to tell them that the prayers of this country’s poor people carry a lot of power.

“President Zardari is going to come out […] He will get medical treatment and then, you all know that he is a hunter. He will come out to hunt the player,” Bilawal told supporters and media.

He also criticised the government and said that it had “ruined the country’s economy and politics”.

“I am giving a political statement; this will be the last year of this government,” Bilawal declared.