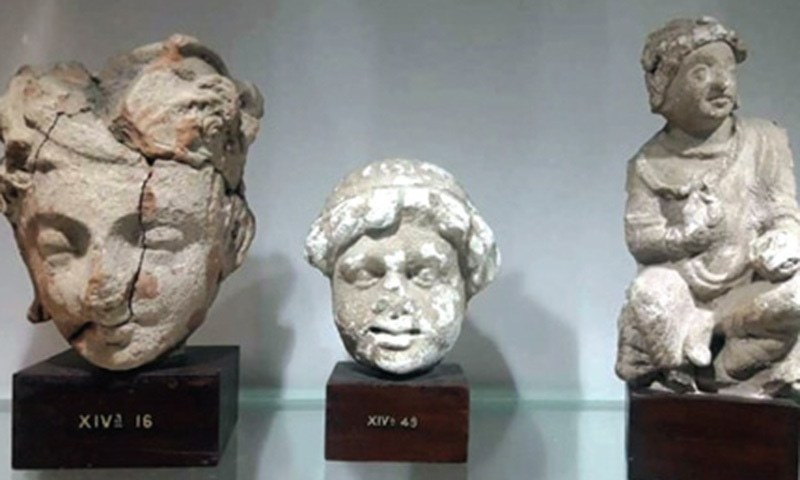 Rare artefacts on display at Islamabad Museum. — Photos by the writer

ISLAMABAD: After decades locked away in its reserves, the Islamabad Museum recently pulled out a statue of the head of Buddha, an artefact from the 3rd to 4th century AD that was discovered by the first Italian archaeological mission in Pakistan.

The statue was excavated in the Swat Valley by a mission led by Dr Giuseppe Tucci. Although the mission began digging in the valley in 1956, the artefact was excavated sometime in the 60s and it was last displayed in a museum in 1997.

He added that stucco scultures of Buddha were frequently found in Taxila and Afghanistan.

What also makes this head of Buddha unique are its sharp, feminine features, with long hair brushed back and wrapped over and around a halo and slanted, feline eyes.

Dr Lone said that Buddha is commonly seen wearing his hair in a bun, with straight eyes.

Belonging to the Kushan period, the extraordinary sculpture was discovered from one of the earliest Buddhist Stupa Buddhkara I from the 3rd century BC, a contemporary of the World Heritage Site Dharma Rajika in Taxila.

Another three terracotta heads of Buddha have also been pulled out of the museum’s reserves and put on display.

The three rare artefacts are from the 2nd to 3rd century AD. They were excavated by British archaeologist Sir John Marshal.

Special attention was given to sculpting the heads of Buddha compared to the rest of the body, and finer material was used as well.

“When the White Huns burnt down Buddhist monasteries and stupas, heads were buried and preserved under the collapsed roofs. The bodies, which were not given much attention, deteriorated and were destroyed over the centuries. This is why the heads of the Buddha have survived to this date,” Dr Lone said.

Equally stunning is the schist stone panel recovered by Italian archaeologists from Swat.

The grey panel is from the 2nd century AD.

Dr Lone said the panel “depicts a temple on fire, while Buddha is seen seated inside and the Kasyapa brothers are trying to put out the flames.”

The art piece symbolises Buddha’s triumph over the fire snake, he explained.