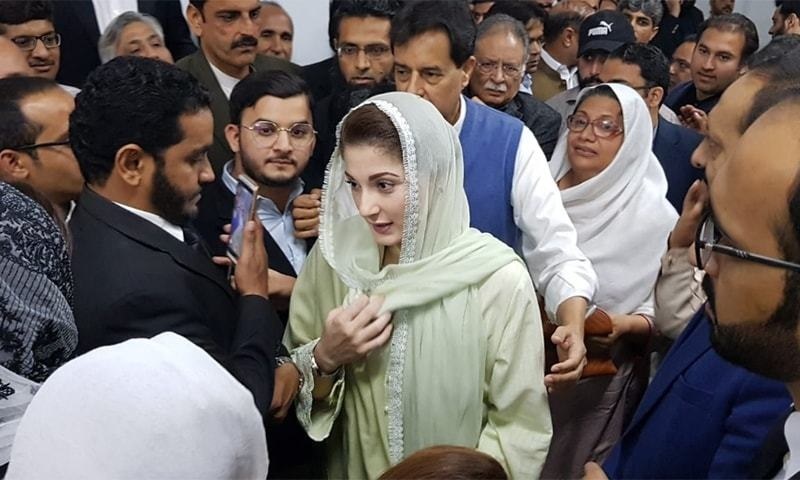 ISLAMABAD: The federal government has decided not to allow Maryam Nawaz, vice president of Pakistan Muslim League-Nawaz and daughter of former premier Nawaz Sharif, to travel abroad and rejected her application in this regard.

“The rules concerning placement of the name of persons on Exit Control List [ECL] do not allow the government to entertain her application to remove her name from the no-fly list,” said senior lawyer and aide to the prime minister Dr Babar Awan while talking to Dawn on Sunday.

Headed by Law Minister Farogh Naseem, the subcommittee of the federal cabinet that deals with ECL cases rejected her plea, as she had sought the facility for flying to London to look after her ailing father, Dr Awan said.

“In fact the subcommittee is part of the cabinet and a formal announcement to bar Maryam from travelling abroad will be made by the federal cabinet in its meeting [on Tuesday],” Mr Awan said.

The Pakistan Tehreek-i-Insaf-led government also hinted at challenging the court’s decision in case the leader of the main opposition party was allowed by the judiciary to travel abroad. In a talk show of a private TV channel, federal Minister for Water Resources Faisal Vawda said that the government would challenge the decision of the court if Ms Nawaz was allowed to leave the country by any court.

The PM’s aide on legal affairs while referring to the Exit from Pakistan (Control) Rules, 2010, said in terms of sub-rule (a) of the rules even if a person having valid travel document to proceed to any destination outside Pakistan, the government could stop them from leaving the country for being involved in corruption and loss to government funds.

He said Ms Nawaz would not be allowed to proceed abroad as those involved in any economic crime, embezzlement of large government funds and institutional fraud could not get permission to leave the country.

While quoting rule 2 [c] of the said ECL Rules-2010, Dr Awan said a person who had been convicted by a competent court of law for any offence should remain on such list [ECL] so long as the said order was in force and till his/her conviction attained finality.

Referring to the departure of her father Nawaz Sharif on health grounds after his conviction in a corruption case, the PM’s aide claimed: “It is unfortunate that those who went abroad on the pretext of critical health condition are not getting medical treatment there, but enjoying stay in palatial houses of which they denied their ownership and had failed to prove the money trail.”

Earlier, Special Assistant to the Prime Minister on Information Dr Firdous Ashiq Awan after the Dec 18 meeting of the PTI’s core committee had also said that the government would not accept Maryam’s request.

“The prime minister and the core committee reiterated their resolve to uphold the belief that no one is above the law and there are no holy cows,” she had added.

According to her, the request by Ms Nawaz to travel abroad to meet her ailing father had been thoroughly debated in the core committee meeting. She said the core committee had observed that how a healthy and completely fit person could be allowed to leave the country just to look after her ailing father. However, she added, the government would “decide the matter based on the recommendations provided by the subcommittee”.

In a statement issued on Sunday, PML-N Information Secretary Marriyum Aurangzeb said the government’s decision to bar the daughter of the ex-prime minister from travelling abroad did not surprise anyone, considering that the PTI regime had always been desperately looking for opportunities to victimise and persecute the PML-N leadership.

“The decision of the sub-committee has no logical reason for keeping Maryam on the ECL,” she claimed.

The ex-minister said Ms Nawaz was granted bail on merit in both the cases against her and her sentences currently stand suspended. “Therefore, she cannot be barred from meeting her ailing father,” she added.

She said the PML-N was aware of the “prejudice and vengeful mindset” of the government that was why she had also filed a request with the court to allow her to travel abroad.

“The failed government has nothing other than political victimisation of opposition leaders on the false pretext of accountability. But the people of Pakistan have figured out this strategy of the imposed PTI regime and they will not be fooled by such petty and vengeful actions,” she added.