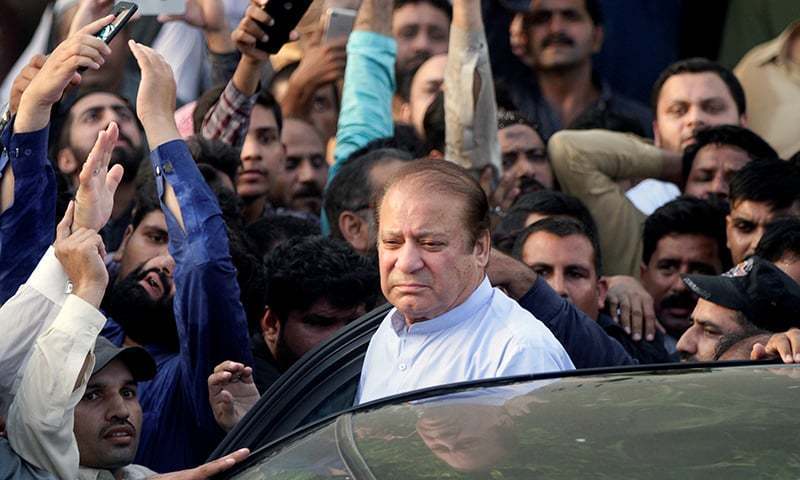 The National Accountability Bureau (NAB) on Monday threw the ball back in the federal government’s court regarding the removal of former prime minister Nawaz Sharif’s name from the Exit Control List (ECL), saying it was the “competent authority” to handle such matters.

The development came hours after government’s chief spokesperson Dr Firdous Ashiq Awan said that the decision to remove Nawaz’s name from the no-fly list will be taken in light of recommendations of NAB and the medical board.

In a response submitted to the interior ministry, NAB said that “the federal government is the competent authority to remove names from the ECL,” Asim Ali Nawazish, a spokesperson for the bureau, told DawnNewsTV.

Earlier in the day, Awan, the special assistant to the prime minister on information, had laid out the procedure for the removal of names from the ECL.

“The government itself does not place any individual’s name on the ECL. Names are placed on the ECL on the recommendations given by NAB and the courts. Now that an application has been filed for the name to be removed, the same process is being followed,” she told the media after her hearing in the Islamabad High Court in a contempt case.

“Hopefully, today we will receive NAB’s recommendations. […] NAB is the plaintiff in this case, he (Nawaz) is a suspect in [a case being probed by] NAB and was convicted by an accountability court.

“Secondly, the recommendations attached with the application filed are made by a medical board of Sharif Medical City. The government does not take decisions in light of directions from a private medical board, it was important to take the opinion of the government’s medical board.”

Awan said that reports from NAB and the medical board were delayed due to the weekend and added that a review committee in the law ministry would “analyse” opinions of both bodies after which the matter would be forwarded to the cabinet.

Meanwhile, speaking to media in Lahore, Punjab Governor Chaudhry Sarwar said that he has personally contacted all relevant institutions regarding the legalities that need to be issued to send the former premier abroad.

“I have personally contacted all relevant institutions and I believe that today his name will be removed from the ECL and he [Nawaz] can travel wherever he wants,” said the governor.

Sarwar added that after the medical board had said that Nawaz should go abroad, the government had adopted a very clear stance that sending him abroad as soon as possible is better, as they don’t want to take any risk regarding the former premier’s health.

PML-N spokesperson Marriyum Aurangzeb expressed concern over the delay in removing Nawaz’s name from the ECL.

Aurangzeb said that once the former premier’s name is removed from the ECL other arrangements, such as arranging an air ambulance and sending the premier abroad, will start.

She said that the delay in removing Nawaz’s name from the ECL poses a threat to his life.

Additionally, Nawaz’s personal physician Dr Adnan Khan said any delay in sending the former premier abroad could increase the risk to his health.

Medical board asked for detailed report

Meanwhile, addressing a press conference, Punjab Health Minister Dr Yasmeen Rashid said that an application had been submitted to the Ministry of Interior to permit Nawaz to go abroad for treatment.

Following this, the interior ministry had written to the health ministry asking them to get the opinion of the medical board. In response to this, the board said they had written a discharge summary and had provided all the details of the tests that needed to be carried out, adding that they [interior ministry] should act as they find suitable.

However, the interior ministry said they wanted a detailed report particularly regarding whether Nawaz should be sent abroad or not.

She said that the board met last night and based on their analysis, they feel that because the former premier’s condition isn’t stabilising and there may be tests that can’t be done in Pakistan, they recommend that he should be sent abroad.

Rashid said the health ministry had written to the medical board informing them that they had found some shortfalls in the report and could not send it to the interior ministry.

They had told the board to provide details of “each test or intervention required with risk factor involved to be specifically mentioned”.

In response to a question regarding whether there was pressure on the medical board, Rashid said: “Being a doctor myself […] when I read the report, I felt that it was insufficient.

“We have not put any sort of political pressure on anyone. I think the board is completely independent, you can ask any board member.”

PML-N President Shehbaz Sharif had last week submitted a request to the interior ministry as well as NAB for the removal of Nawaz’s name from the ECL so that the former prime minister could travel abroad for medical treatment. Nawaz has been diagnosed with an immune system disorder and his condition is said to be “extremely critical”.

“Nawaz Sharif has finally agreed to go to London after the doctors told him categorically that they had already exhausted all medical treatment [options] available in Pakistan and going abroad is the only option left,” a Sharif family source told Dawn on Thursday.

In a statement, the interior ministry said last week that it had forwarded Nawaz’s health reports received from Sharif Medical City, Lahore to the “Standing Medical Board” for their input and review.

There were reports that the former prime minister may leave for London today; however, the procedure to remove his name from the no-fly list remains incomplete. In addition, his platelet count remained unstable and, according to Aurangzeb, doctors continued to struggle to get his platelet levels up to the required mark for travel.

Meanwhile, Foreign Minister Shah Mahmood Qureshi on Sunday said that “legal obstacles” to Sharif’s departure were being removed as doctors had stressed that medical treatment abroad was needed to save his life.

“The government has given importance to the doctors’ opinion,” Qureshi told reporters in Multan.

“We pray to God for his recovery, so that he returns with good health and takes part in politics,” he added.

Nawaz’s daughter Maryam will not be able to accompany her father abroad as she had to surrender her passport in order to secure her release on bail in the Chaudhry Sugar Mills case.