Time has proved the allegations and fears of the opposition wrong, Shibli Faraz

In Rawalpindi, an accused was arrested for uttering obscene words against a lady polio worker

General elections will be held in 2023 and the opposition will fail again, Fawad Chaudhry

Let the people make their own arrangements. We have to pay dearly for encroachments, Railway Minister

In Karachi, a man who tried to rape a girl was caught by the residents

The number of active cases of corona virus in the country has increased to more than 8,000

An elected government is needed to create an atmosphere of confrontation and confrontation, Shahbaz Sharif said 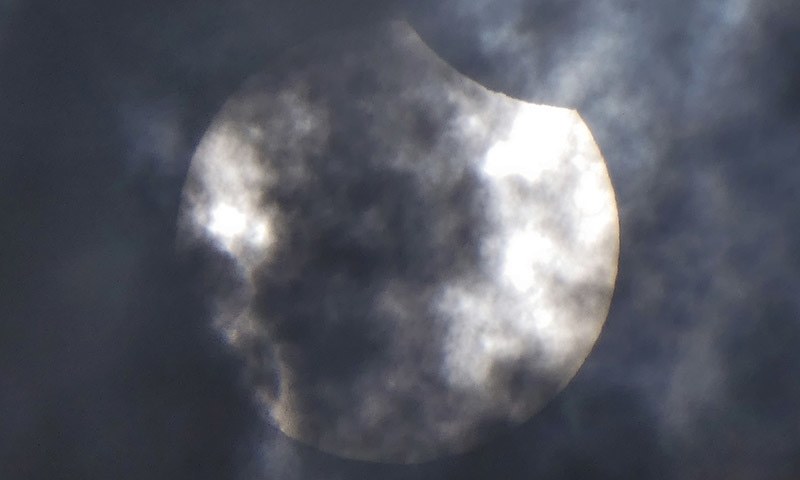 An annular solar eclipse, said to be the last big celestial event of the year as it comes to a close, descended upon parts of Pakistan on Thursday morning.

The Pakistan Meteorological Department had said the eclipse would be visible all over Pakistan, especially in Karachi and Gwadar. It said the celestial event would be visible in eastern Europe, northern and western Australia, eastern Africa, Pacific Ocean and Indian Ocean, and much of Asia, including Pakistan.

The eclipse has also started in Indonesia, the United Arab Emirates and parts of India.

People have been advised not to look at the sun with the naked eye during the eclipse because it may cause permanent eye damage or even blindness.

The Met Department shared the duration of the eclipse in various cities of Pakistan:

The solar eclipse is not a total eclipse but an annular one. This means the sun and the moon will be positioned in a way to form a “ring of fire” as the moon won’t be able to completely cover the sun. Hence its edges will be illuminated.

The rare and historic event is completely different from the total solar eclipse that took place in August 1999 due to the ‘albedo effect’. It means that most of the radiation did not reach the ground and got deflected back into space because of cloudy skies previously. But this time there are clear skies. Therefore, there will be a direct impact of the radiation. People have been advised not to look at the sun with the naked eye during the eclipse.

Khaleej Times shared information regarding safety during an eclipse:

There are several superstitions being associated with the celestial event. Some say it may bring about major changes in world politics with shifts in power.

Other beliefs include thoughts of fear. In ancient China, people used to counter the effects of a solar eclipse by getting together and screaming aloud. They believed that there was a big snake eating up the moon which needed to be stopped and scared away with the noise.

Some believe expectant mothers should not go out when there is a solar eclipse and to stay away from sharp objects. Pregnant animals such as livestock are also brought indoors at such times.

There is also a belief that there are stage germs unleashed during a solar eclipse so all eatables are also kept covered or in the fridge.

Some countries announce a public holiday on such occasions.

People associate life and death with solar eclipses and therefore they offer additional prayers at this time. They may also sacrifice animals or give a little extra to charity. Special or ‘Kusoof’ prayers are also offered in mosques of Pakistan and other Islamic countries.