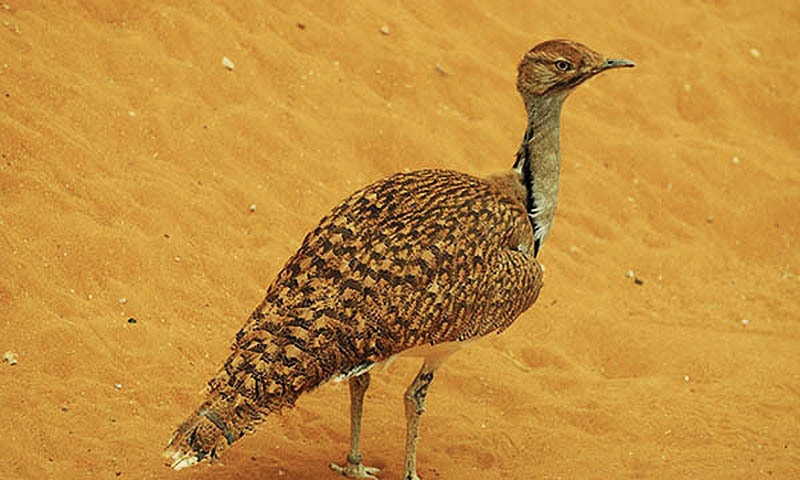 KARACHI: The federal government has issued special permits to King of Bahrain Sheikh Hamad bin Isa bin Salman al Khalifa and five other members of his family to hunt the internationally-protected houbara bustard during the 2019-20 hunting season, it is learnt here reliably.

Besides the king, the hunting party includes his uncle, his country’s interior minister, adviser on defence, cousins, and other people of the kingdom located on the northern side of the Arabian peninsula in the Gulf.

Originally belonging to the colder central Asian region, the houbara bustard migrates every year southwards to winter in a relatively warm environment here.

Owing to ruthless hunting by Arab hunters, the population of the migratory bird has declined because of which it is not only protected under various international nature conservation conventions, but its hunting is also banned under local wildlife protection laws. Pakistanis are not allowed to hunt this bird.

Under a code of conduct issued by the foreign ministry, a hunter can hunt 100 houbara bustards in a 10-day hunting spree during the three-month-long hunting season between Nov 1, 2019 and Jan 31, 2020. According to the special hunting permits issued by the foreign ministry’s deputy chief of protocol Mohammad Adeel Pervaiz and delivered at the Embassy of the Kingdom of Bahrain in the federal capital, the names of hunters and the areas allocated to them are: King of the Kingdom of Bahrain Sheikh Hamad bin Isa bin Salman al Khalifa has been allocated Jamshoro district (including Thano Bula Khan, Kotri, Manjhand and Sehwan tehsils).

The king’s cousin, who is also his interior minister, Lt Gen Sheikh Rashid bin Abdullah al Khalifa, will hunt in Naushahro Feroze district in Sindh and Jaffarabad district in Balochistan.

The king’s adviser on defence, Sheikh Abdullah bin Salman al Khalifa, will carry out the hunting of the protected bird in Sujawal district’s Jati tehsil.

A cousin of the king, Sheikh Khalid bin Rashid bin Abdullah al Khalifa, has been given Tando Mohammad Khan, while his another cousin, Sheikh Ahmad bin Ali al Khalifa, will hunt in Hyderabad and Malir (excluding Malir Cantonment and Dhabeji areas) districts.