Home English News "The voices of Allah Akbar kept coming from the wreckage of the... 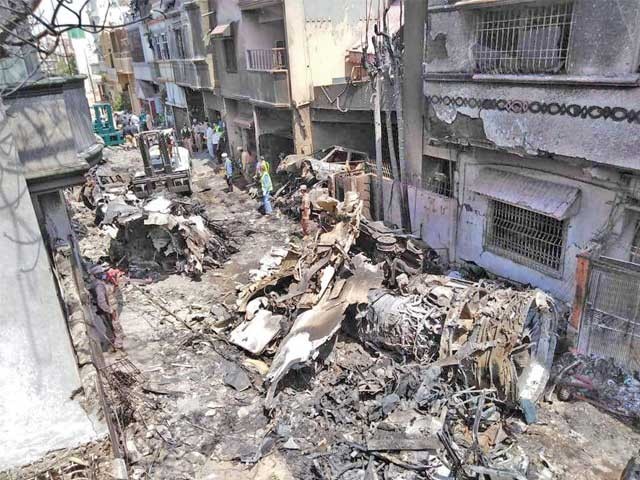 As soon as the plane crashed, a fire broke out. Many houses were blackened by the fire and smoke. The wreckage of the plane is still lying on the roofs. Photo: AFP

Karachi: The unfortunate plane of the national airline PK8303 crashed in the residential area of ​​Jinnah Garden adjacent to Karachi Airport on Friday afternoon. ۔

On one side of the street where the plane crashed are 120 yards of houses that have been most affected, while on the other side are 240 yards of houses. According to the victims, large houses have been partially affected. The roofs of houses on both sides of the street and the first or second floor are more affected. The wreckage of the ship is still lying on the roofs of houses. Noman Shami, a resident of Jinnah Ground's affected house No. 117, said he was at home with other members of his family when the plane crashed.

Suddenly, there was a huge explosion that shocked the children and adults alike. The blast shook buildings. It looked like an earthquake. He said that houses from house number 114-R to about 130-R have been most affected while some are partially affected. Noman Shami said that for a long time we sat in the house in shock and kept mentioning it.

Screams and shouts from the houses while Akbar's voices were heard from the wreckage of the ship for some time, as soon as the ship crashed, a big fire broke out in it. Shortly afterwards, fire brigade vehicles and law enforcement personnel arrived and took control of the situation. During a survey of the area, some victims said on condition of anonymity that electricity and gas connections to the affected houses as well as the entire street were cut off.

The water tanks of many houses have been destroyed. Except for one family, people are still living in their affected homes where the basic necessities of life are cut off. A resident of 125-R said that at the time when the plane was crashing, he lost his life. He got out of the car and started walking out, but as soon as the explosion took place, he left his car and went back into the house and consoled his wife and children. He said that the explosion of the plane was very terrible. For a long time we were in a state of trauma and did not leave the house. In addition, Pakistan Army, Rangers and SSU commandos remained deployed in the affected streets and surrounding areas throughout the day on Saturday. No unauthorized persons or media were allowed to enter the affected street.

The area had been cordoned off by law enforcement since morning. Women were also not allowed to cross the affected street. Officials and staff of utility providers were allowed to visit the affected houses throughout the day, but they were also allowed to inspect the affected houses after permission. Officials from civil aviation, PIA and various welfare organizations, including K Electric, Water Board and Sui Southern Gas Company, visited the affected area while heavy machinery was used to collect the wreckage in the street to prepare a forensic report. Get help

They said a survey had been launched to assess the damage caused by the crash. A team of federal agencies is surveying the affected houses and vehicles in the area. The plane crashed in Jinnah Town, damaging more than 15 houses. Most homes were partially damaged. Some homes have been badly damaged. According to the affected people, it has been hinted to give Rs. 1 million to the completely destroyed houses, while others will be given Rs. 5.5 million. Affected homeowners were concerned about government funding. He said that the damage caused should be completely repaired.