PM's letter to Islamic heads of state, request to unite on the issue of blasphemous sketches

Changing the land ownership laws of Indian-occupied Kashmir is a war crime, Pakistan

Decision to reduce salaries and benefits of PIA pilots

Several schools in Karachi closed due to corona cases

A commotion in the National Assembly session, Agha Rafiullah of PPP was expelled from the House

There were 5 Indian spies who completed their sentence in Pakistan

Afghan soil should not be used against Pakistan, Shah Mehmood Qureshi contacts his Afghan counterpart

It was the responsibility of the administration to provide security to us, complained the superintendent of Peshawar Madrassa

A blast inside a madrassa in Peshawar killed eight people, including children, and injured 110

Recovery of Rs. 2 billion for corruption from federal departments 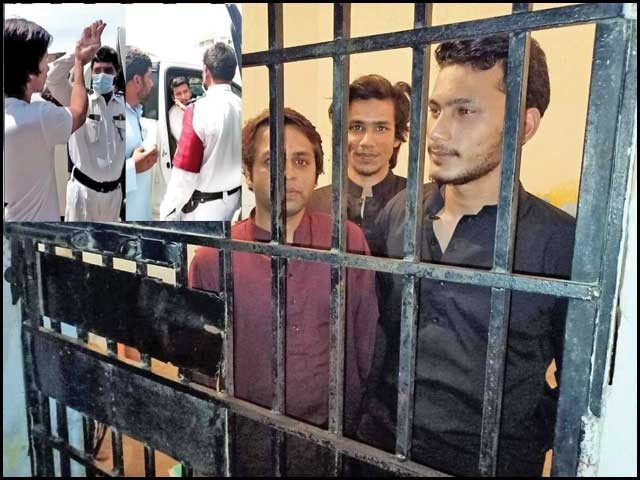 The young man in the car is preventing the traffic officer from taking off the black bandage on the glass, while the three young men are standing in the lock-up.
۔ Photo: Express

Karachi: On the instructions of Karachi Police Chief Ghulam Nabi Memon, during the ongoing campaign against vehicles with tinted windows, fancy number plates, hotspots and police lights in the city, it was costly for the Nawabs to get into trouble with the traffic police went.

When the traffic police stopped them for violating one-way, using black glasses and police lights, the youths insulted the traffic police officer and got into a scuffle. Federal B Industrial Area Police arrested 3 accused including 2 brothers in the case and also seized the vehicle.

In this regard, the plaintiff Gulberg Traffic Police Section Officer Shahnawaz Kaloor said that the incident took place on September 22 near Lucky One Mall on Rashid Minhas Road. They stopped him while he was coming and talked about the black glass of the car and the blue and blue light of the police. A plain-clothed armed man also tried to put pressure on him but he did not let the vehicle go and informed the area police but no cooperation was given by them. Later the vehicle was taken to the police station.

Shahnawaz Kalhoor said that the vehicle was challaned and the seized vehicle could not be released till the challan was submitted. However, SHO Federal B Industrial Area not only released the seized vehicle but also the vehicle. They did not even take off the black stickers. However, when the video of the incident went viral on social media, the top officials also became active and ordered to arrest the occupants of the vehicle and register a case against them.

When SHO Federal B Industrial Area Farrukh Shehryar was contacted, he said that under what law he stopped the vehicle, no request was made to the police and no statement was recorded on which he informed the youth to go with the vehicle. However, a formal request has been made to SO Gulberg Shahnawaz Kalhoor to register a case of the incident and he has also recorded his statement on which the police took immediate action. Saad and his friend Shahzeb were arrested and a case was registered and the vehicle was also seized.