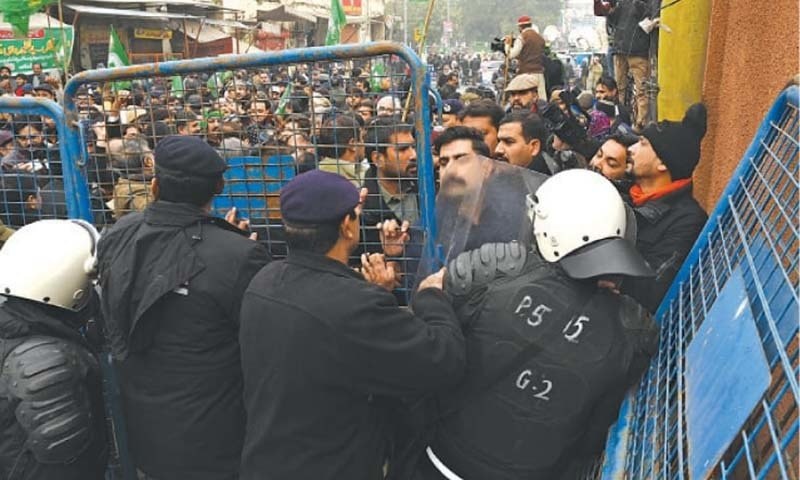 LAHORE: A PML-N leader has passed the buck to party vice-president Maryam Nawaz before the Federal Investigation Agency (FIA) while explaining the videotapes of accountability judge Arshad Malik who had convicted former prime minister Nawaz Sharif in the Al-Azizia Mills corruption case.

“It mainly asked him to tell who made the secret video of the judge and at whose behest. Who gave these videotapes to Maryam Nawaz, daughter of Nawaz Sharif,” a source said.

Mr Tarar who is also a spokesperson for PML-N president Shahbaz Sharif, replied that he had no knowledge about this and he came to know about the secret videotapes when these were run on screen during the press conference of Maryam Nawaz in July.

“To almost every question Mr Tarar passed the buck to Maryam Nawaz telling the FIA team to better ask her about these videotapes,” the source said. Mr Tarar also expressed his ignorance about the objectionable video of Judge Malik allegedly obtained by another PML-N leader, Mian Saleem Raza, from detained suspect Mian Tariq.

The FIA on Friday also raided the residence of Raza in Mian Mir and confiscated computer hardware and CDs. According to the source, Mian Raza had paid handsome money to Mian Tariq to obtain the objectionable video of the judge in question which was later used to make his another secret video with regard to his alleged ‘confession’ regarding the Al-Azizia case verdict. “Mian Raza has managed to flee to Europe,” he said.

On July 6, Maryam Nawaz had held a press conference at the Model Town secretariat and played a ‘secretly recorded’ video in which judge Arshad Malik was allegedly seen saying that he was “pressurised and blackmailed” into convicting her father Nawaz Sharif in the Al-Azizia corruption reference.

An FIA team on Thursday raided the PML-N secretariat in Model Town to examine the place where Maryam’s presser was held and taken away the hardware of a computer.

On Friday, a good number of PML-N workers gathered outside the FIA building on Temple Road and chanted slogans against Prime Minister Imran Khan for implicating their leaders in what they said false cases. A heavy contingent of police was present to handle the demonstration. The workers, however, dispersed peacefully.

After appearing before the FIA investigators, Attaullah Tarar told reporters that he had already submitted a reply a few months ago. “Now the FIA is quizzing me about my presence in the presser,” he said and asked why Judge Malik was not being investigated about his purported video in which he claimed that he was blackmailed and pressurised to give verdict against Nawaz Sharif (in Al-Azizia case),” he said.

He asked why the government was reluctant to conduct a forensic audit of the videotapes.

Mr Tarar said the FIA had already submitted its report to court but now after Wajid Zia took over the charge as the FIA head, he started summoning the PML-N leaders in this matter.

“The appointment of Wajid Zia is political and he is given the task against the PML-N. The PML-N will challenge his appointment in a court of law,” he said, adding that the PML-N would continue fighting the “fascist” regime of Imran Khan.

The FIA has also summoned PML-N Senator Pervaiz Rashid and party’s Punjab information secretary MPA Azma Bokhari on Dec 30. Ms Bokhari is in London and may not appear before the FIA investigators.